Solution: In the early 2000s, different studies using magnetic resonance imaging were able to show that the brain is adapting according to our behavior or experience 1,2,3. Last week’s Guess the Publication cartoon is based on the 2004 study conducted by Draganski and colleagues3 entitled „Neuroplasticity: Changes in grey matter induced by training“. In their study the authors demonstrate stimulus-dependent change in the brain’s macroscopic structure, or anatomy, in participants that were learning a completely new skill, namely juggling. On important conclusion of the authors’ results lies in demonstrating, that no matter what age our brains still have the capability to change. More specifically, what we experience (environment and training) impacts brain anatomy. Brain development is thus in some ways a constant process and not something that is finalized at the end of late adolescence. Importantly, within their study design Draganski and his colleagues used a longitudinal approach that included healthy non-juggling adults that received three months of training (experimental/juggling group) and healthy non-juggling adults that received no training (control group). They scanned both a control and a juggling group before study start, after three months of practice for the jugglers, but not the controls, and then again three months later. In the last three months the juggler group also had to refrain from practicing (no training).

Take home message: No matter your age, if you are investing time in learning something new, this will impact your brain structure and function already after a few weeks. However, if you want to keep up those benefits, you have to continue practicing. Therefore, our main message of the week is: USE IT OR LOSE IT! 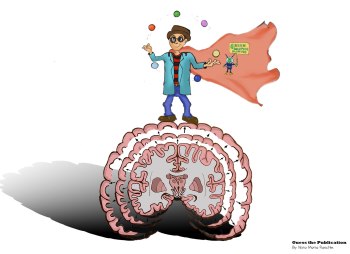