Here is our solution to our cartoon (4th ed.) from our Guess the publication section. 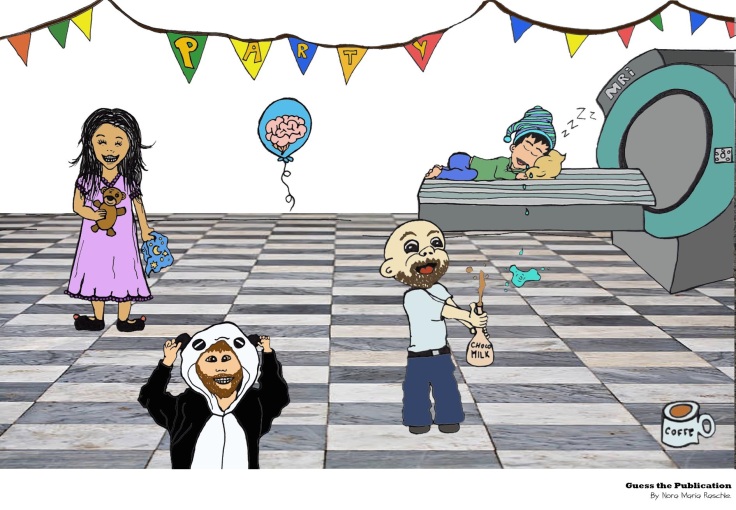 Solution:  Our cartoon of the week was motivated by the 2017 publication of Gordon & Laumann and colleagues in Neuron, which was entitled “Precision functional mapping of individual human brains”. Nights filled with neuroimaging sessions organized by the group led to an unprecedented amount of hours’ worth of structural, functional and resting state MRI data in 10 adults. To be precise, 850 minutes of it for each individual. Not only did the team acquire all that data, they also provided it as a resource for others to further our understanding of individual human brain maps.

Let’s be honest, when looking at such individual brain maps (e.g. Fig 4. Graph Analysis within Gordon et al., 2017), they look stunning! And complicated. So, what exactly do they tell us again? The research team describes that one of the core ideas behind the start of their project was that there might be a limitation deriving from the fact that neuroimaging has focused predominantly on group-averaged brain data. This may have the disadvantage of losing detailed and more specific information from one individual and thus consequently reduces its clinical applicability. If neurobiological markers were to be used for prognostic purposes, they would have to be reliable (which refers to the consistency of a finding or how often the same result is obtained when re-evaluated) and valid (meaning that it has to correspond to real-world applications). The presented findings are a first indication for differences in individually obtained versus group-averaged network findings.

The midnight scan club and their work on individualized brain data is following pioneering work by scientists including Prof. Russell Poldrack from Stanford University. Poldrack provided a first approach on individual brain mapping, by scanning himself twice for close to 18 months. By doing so, it became the most in-depth studied individual human brain ever (read more in the following article, or see this original publication called “Long-term neural and physiological phenotyping of a single human” which appeared in Nature Communications). We could not help, but wonder – how did it feel for that brain to be scanned so often: like being a celebrity or more like being in the movie groundhog day?

But joking aside, these examples sure make us interested in knowing more about where the field moves next. It certainly has inspired many to look at data differently. Let’s see how much of a paradigm shift in data collection and interpretation will follow!

Take home message: An increased focus on more quality data from one individual may hold more specific and precise information as opposed to data obtained by a large group average. Instead of averaging data across a certain group, hours of scan data in each participant was obtained in order to increase specificity and precision within a single individual. Through a highly sampled and now publicly available ten-subject data set individual variations in the basic brain organization were revealed across all participants scanned (i.e. circular networks in some, linear networks in other individuals). Such approaches may hold promise to ultimately inform about brain networks in health and disease.

Fun fact: The term midnight scan club is reflective of the fact that the group used scan time after midnight in order to being able to scan for long periods of time and most importantly being able to pay for it (annotation: most scan sites charge >500CHF/USD per scan hour).